Here’s what you need to know:

Gonzaga is the top No. 1 seed in the men’s tournament field.Credit…David Becker/Associated Press

Gonzaga, the top No. 1 seed, is the first team to enter the N.C.A.A. men’s tournament undefeated since Kentucky in 2014-15, and the Zags have a legitimate shot to become the first undefeated national champion since Indiana finished 32-0 in the 1975-76 season.

No. 1 Baylor had the best start in program history, with 18 consecutive victories, and won the Big 12 regular-season title for the first time. The last time the Bears clinched a conference title was in 1950 as a co-champion and in 1948 as the outright winner. Baylor’s proficiency — it led the league in 3-point shooting this season — could help reverse its struggles of late.

No. 1 Illinois will be playing in its first N.C.A.A. tournament since 2013. Its run in the Big Ten tournament, which it won with an overtime victory against Ohio State on Sunday evening, was the work of a team that felt spurned: The Fighting Illini have been irate over the winning-percentage model, approved months ago, that gave Michigan the Big Ten regular-season title. Unfortunately for other conferences, Illinois may now be looking to take out some frustrations on their teams.

No. 1 Michigan was 19-3 entering the Big Ten tournament despite going 23 days between games when the university athletic department shut down all sports for three weeks because of coronavirus concerns. In his second season, Coach Juwan Howard has guided the Wolverines to their first No. 1 seed in the N.C.A.A. tournament since 1993, when he played on a team that reached back-to-back N.C.A.A. championship games. 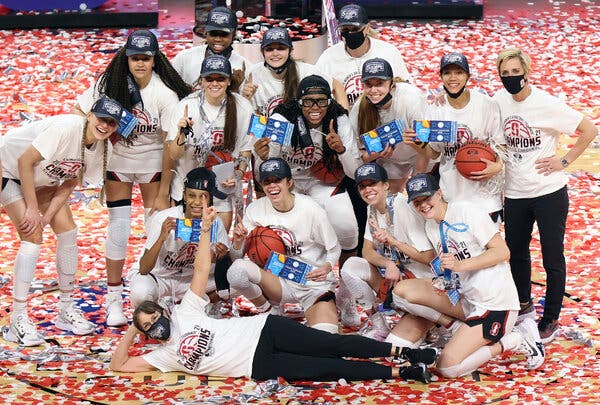 Stanford, led by the senior guard Kiana Williams, is the No. 1 seed over all. The Cardinal clinched the Pac-12 tournament championship for the first time since 2014 with a 20-point win over U.C.L.A. on March 7 after just two losses during the regular season, including nine weeks of practice and play in Las Vegas.

In December, Stanford’s Tara VanDerveer became the coach with the most victories ever in Division I women’s college basketball, surpassing the late Pat Summitt of Tennessee with her 1,099th win. Now VanDerveer and the Cardinal are in a strong position to compete for their third N.C.A.A. title and their first since 1992.

The rest of the No. 1 seeds are UConn, South Carolina and North Carolina State.

Hours before the field was revealed on Monday, UConn announced that its coach, Geno Auriemma, had tested positive for the coronavirus and would not immediately travel with the rest of his team to Texas, where the tournament is being staged. The round of 64 begins on Sunday.

The toughest region might be topped by No. 1 UConn and No. 2 Baylor. Placing the defending champion, Baylor, and a perpetual favorite, UConn, in the same region is a nifty way for the selection committee to potentially continue what has, over the past decade, become something of a rivalry. As it stands now, each team has beaten the other four times.

Also in the region, No. 3 seed Tennessee and No. 4 seed Kentucky are both battle tested thanks to their slog through the Southeastern Conference, where both churned out nine wins that spotlighted their respective stars Rennia Davis and Rhyne Howard. 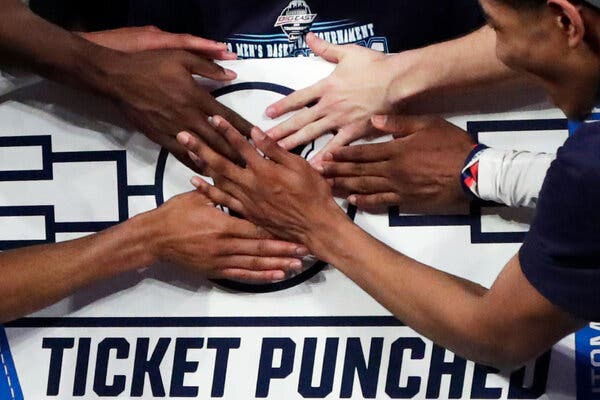 Picking a correct champion is but one part of winning your office (or virtual) pool.Credit…Julio Cortez/Associated Press

You don’t need to be a college basketball expert. But you do need to read the rules of the pool thoroughly.

If it’s an old-school pool that awards the same number of points no matter which team you pick, you’re going to want to stick to the favorites. Don’t be clever with U.C. Santa Barbara or Liberty. There’s no reason to; the reward is just not worth the risk.

But if the pool awards bonus points for upsets, you’ve got to go in a completely different direction. Now you want to pick long shots in the early rounds; indeed, you must do so to have any chance of winning.

The number of players in the pool can have a big effect. If the pool is just you and a handful of friends, go ahead and pick all the favorites. But the best bet for a bigger pool is to mix up your picks a bit once you’re down to the final eight. And when picking your eventual winner, it can be to your benefit not to go with the team everyone else in your pool likes. 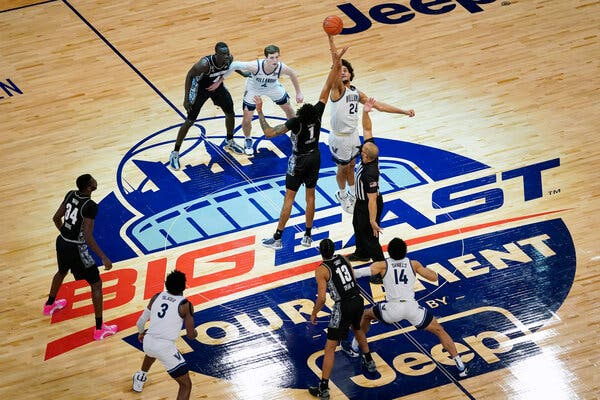 Georgetown upset Villanova in the Big East tournament, but there are reasons to think the Wildcats may return to form.Credit…Mary Altaffer/Associated Press

Look at the betting lines. In general, the better seeded teams have a better chance to win. But sometimes the oddsmakers see it a little differently. In any game in which the seeding and bookmakers disagree, go with the bookmakers.

Beware of the “hot team.” Inevitably, there are teams that get hot in their conference tournaments and get a lot of buzz to do well in the N.C.A.A. tournament. Don’t fall for the hype.

Look at the preseason favorites. A surprisingly good indicator of tournament success was unearthed by FiveThirtyEight a few years ago: the preseason poll. Teams that were ranked highly going into the season but underachieved often do well in the N.C.A.A. tournament. 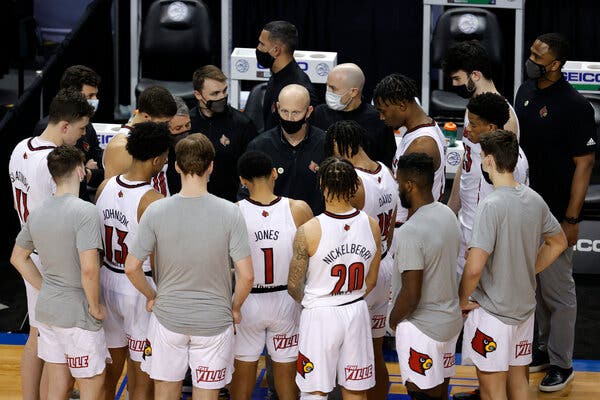 Coach Chris Mack’s Louisville team, which just missed making the field for the N.C.A.A. tournament, will be the first team called on should a team that earned a berth be unable to play.Credit…Jared C. Tilton/Getty Images

The men’s bracket may be out, but it will not freeze until 6 p.m. Eastern time on Tuesday — an allowance for the possibility that the virus will derail a team’s hopes while giving another a chance to play for a championship.

The rules vary depending on a stricken team’s home conference.

If a team plays in a league that has just one team in the tournament, the conference may choose its substitute. The new team will assume the position in the bracket of the team it replaced.

If a team is from a league that earned multiple tournament bids, four teams — Louisville, Colorado State, St. Louis and Mississippi — will be waiting to replace it in the same bracket spot. Replacement teams that do not ultimately qualify for the N.C.A.A.’s men’s tournament may play in the National Invitation Tournament as No. 1 seeds.

Once the deadline passes on Tuesday, no new teams will be added to the brackets for the men’s or women’s tournaments. When the tournament is underway, if a team does not have at least five eligible, healthy players to start a game, the game will be classified as a no-contest, moving the opponent to the next round. 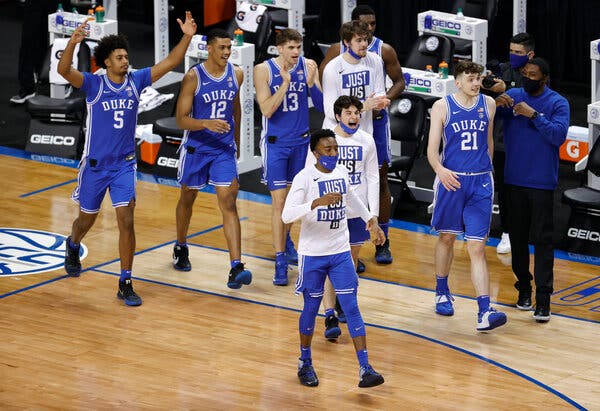 Duke and Kentucky have combined to win three championships since 2010, but for the first time since 1976, when the field had only 32 teams, neither will be in the field this year.

Kentucky’s season came to a merciful end last Thursday when the Wildcats lost to Mississippi State in the SEC tournament. That came about two hours after Duke had announced that its season was over after a member of the program tested positive for the coronavirus.

Kansas and another marquee team, Virginia, withdrew from their conference tournaments last week because of coronavirus cases, throwing into question whether they would be able to participate in the N.C.A.A. tournament. Virginia is seeded No. 4 in the West region.

As in recent years, the men’s tournament games will be broadcast on CBS, TBS, TNT and TruTV. The official way to stream the tournament is through the N.C.A.A.’s March Madness Live app, which requires logging in through a TV provider. (The Paramount+ app will also carry games broadcast on CBS.)

The women’s tournament games will be broadcast on ESPN, ABC, ESPN2 and ESPNU and can be streamed on the ESPN app.

Here is the round-by-round schedule: 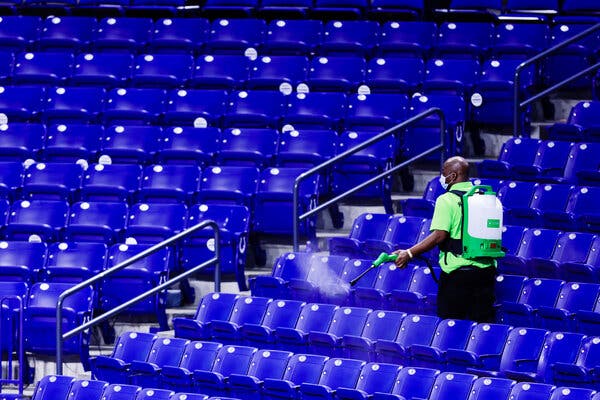 A Lucas Oil Stadium employee disinfecting the seats in between games during the second round of the Big Ten men’s basketball tournament.Credit…Justin Casterline/Getty Images

To reduce travel, most men’s tournament games will be played in Indianapolis, where the Bankers Life Fieldhouse, Hinkle Fieldhouse, Indiana Farmers Coliseum and Lucas Oil Stadium will host games. Teams will also play at Mackey Arena, on the campus of Purdue University in West Lafayette, Ind., and Assembly Hall, which is at Indiana University in Bloomington. 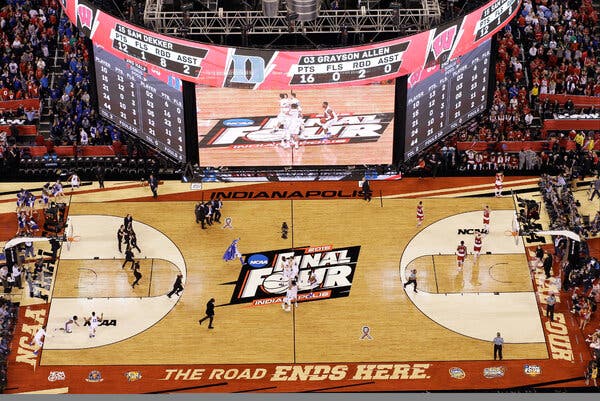 More than 2,300 people in the travel parties for the 68 teams in the tournament field — players, coaches, trainers and the like — are expected to descend on Indiana for the men’s tournament. But there will also be referees, N.C.A.A. staff members, security guards, cleaning crews, journalists, relatives and fans to fill venues to up to 25 percent of their usual capacity.

In a normal year, the biggest tournament site in Indianapolis, Lucas Oil Fieldhouse, could hold up to 70,000 fans for the regional finals and the Final Four.

Spectators will largely be barred from the first and second rounds of the women’s tournament, which will be played in Texas. Beginning with that tournament’s round of 16, the Alamodome in San Antonio is expected to host no more than about 11,000 spectators.

The most well-guarded participants in the tournaments, including players and coaches, will be required to stay within what the N.C.A.A. has described as a “controlled environment.” Others, even those who may be near the courtside, will not face any such limits, though they will have to wear masks and attempt to remain six feet away from people.

Still, the N.C.A.A. quietly rewrote part of its coronavirus safety protocols to potentially shorten the quarantines of some teams arriving in Indiana for the men’s tournament, The New York Times reported on Monday.

Several public health experts said they were baffled by the decision to welcome fans to the tournament.

The Rise of Digital Securities

Yaphet Kotto, Magnetic Actor With A Long And Varied Career, Dies At 81 : NPR