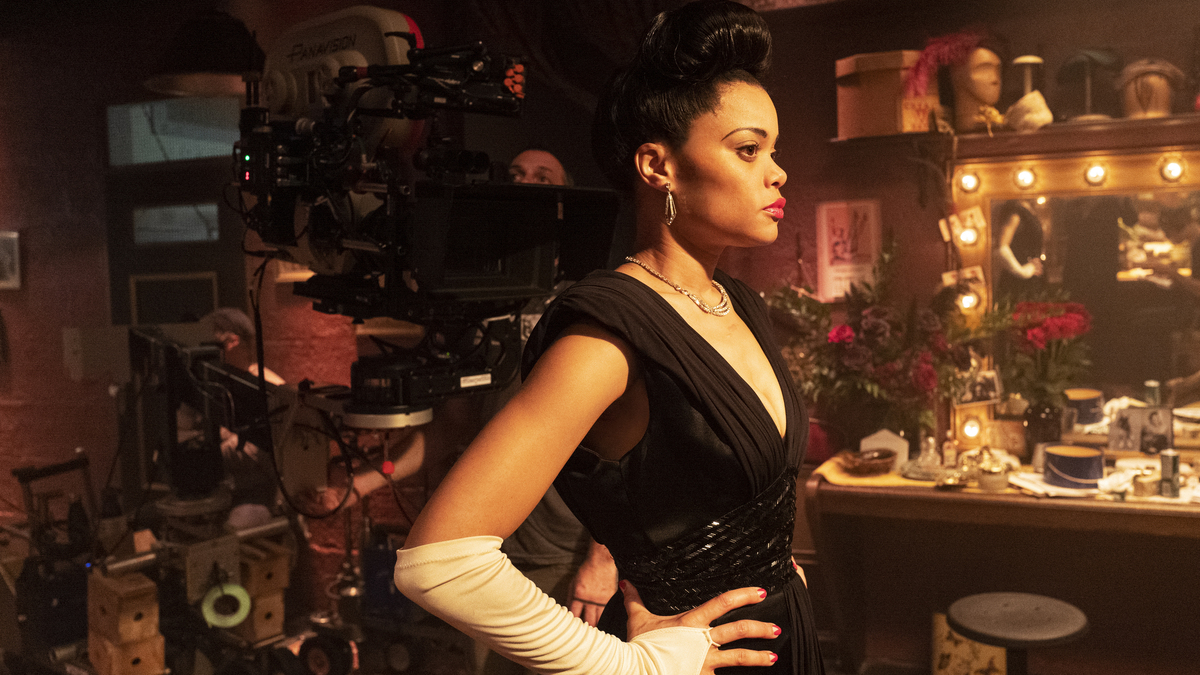 Grammy-nominated singer Andra Day in a still image from the USA against Billie Holiday.

The song “Strange Fruit” was written by a man named Abel Meeropol in the 1930s – but it’s forever associated with Billie Holiday. The lyrics vividly describe a lynching, and this haunting protest song plays a central role in the new film The United States Vs. Billie Holiday. Grammy-nominated singer Andra Day plays the title character. The role is Day’s acting debut, but it has already won a Golden Globe for its performance.

“Andra Day” is actually her stage name, a homage to Holiday itself: Day has been a fan since she was 11. The artist adopted it from “Lady Day”, a nickname that Holiday received from Lester Young – one of her greatest friends. “I love the relationship between her and Lester Young,” says Days, “the amazing, incomparable Lester Young. And he nicknamed her Lady Day and she called him “The President” or “Prez” for short. And then he called her mother “The Dutchess” – well, that’s what Billie says, and she would always refer to her as “The Royal Family”. I love the name “Lady Day”. It feels royal to me. “

Andra Day spoke to NPR’s Ari Shapiro about the pressures of playing Billie Holiday, how she initially turned down the role and continued intensity of “Strange Fruit”. Listen to the radio version at the audio link and read on for an edited transcript.

This interview has been edited for length and clarity.

Ari Shapiro: I’m just trying to imagine how a kid would deal with this song “Strange Fruit” that is so central to this movie.

Andra Day: I mean, at 11 years old, even though I didn’t know all the details about what she was talking about, it felt like. You know what I mean? It’s in my DNA. It’s in our DNA.

Our DNA as a country, do you mean?

Yes, I think as a nation. And as a people, as a black … I remember being very reassured by the song, almost kind of depressed. All I knew was that it made me sad – it let me know that whoever saw this woman was making me worried about her … I knew she was sacrificing. I knew there was a loss. There was such pain there and it was … it amazed me as a kid. It really just impressed me.

Did the fact that your first role as Billie Holiday ended felt like the universe had conspired in the right way? Or was it like your first race suddenly became the New York City Marathon? What is the experience?

Definitely the latter. [Laughs] It just felt like, “Oh, so you want me to do a movie and you want me to do this role?” To be honest, my first reaction was actually “Hell no”. I really didn’t mean to do it. And it turns out Lee [Daniels] didn’t want me to either.

Lee Daniels the director didn’t want you to do it?

No, he didn’t want me. It was his manager and his people that said, “You have to meet her, you have to meet her” you know? And my people tell me the same thing. I would give people the pictures: He and I are sitting in this meeting and looking at each other like, “What the hell are we doing here?” [Laughs]

So what convinced you? Like what tipped the scales for you?

You know, to me I am a very deeply spiritual person. At least I like to try to see myself as one. And so there were two things in particular. It was ultimately a prayer. I remember getting lost in devotion reading and meditating on a scripture. I actually tried to pray to get out of there. [Laughs] It was one of those, “Oh God, please God, make this go away!” And instead, there was a scripture that day in scripture about being led to do an act of great faith. Not to have someone do something for you or make something go away, but to be made to weather the storm and do an act of great faith. And I said, “Ah …” And the other one was to meet Lee, you know? He felt the need to tell her story authentically in order to show her as a multi-layered person. Because it wasn’t until he was that age that he understood who Billie was, that she was a fighter, and that her legacy was deliberately suppressed.

A recording of “Strange Fruit” released in 2017 by Andra Day in association with the Equal Justice Initiative.

One of the driving forces behind this film is the FBI’s fear of the song “Strange Fruit,” which describes lynching in these vivid, poetic, terrifying terms. Can you tell us what the FBI was so afraid of?

First of all, thank you very much for saying “terrible terms”. That’s one of the things for me on set. I realized that calling “Strange Fruit” a beautiful song was almost like a slap in the face of what she was trying to do. You know? What makes it beautiful is its truth. But it’s a terrible song. And what they were afraid of was that “Strange Fruit” was truth. It is pure, unadulterated, uncompromising truth. And when you try to survive in a social climate of inequality, a system of racial inequality, those systems are built on lies and deception. And of course such a system can really only be broken down with truth and light. These dark places expose what “Strange Fruit” threatened to do. She integrated the audience. She tried to fight for equality. And they wanted a system of domination – and she fought against it.

You know, we hear so often artists talk about the power of art. But the fact that the FBI was afraid of the power of this song says something. And I just wonder what – for you – as a singer, this story tells about the real impact that your craft, your music can have?

First of all, it just reminds me that it’s power, you know? You hear this sentence all the time, right, that “music is the only thing that can enter your psyche without permission.” But it is actually that powerful. I think what his power is is not just the power to move and shake things, but it is the power to heal. And in healing, things have to be moved. And they have to be shaken. And they have to be demolished or rebuilt, you know. And we see it – we saw it in the 60s, right, with all this kind of renaissance of artists creating all this protest music about race and war. It only reminded me so strongly of it, like, “That makes music – it heals.”

Can you tell me what it was like to deliver the line “Your grandchildren are going to sing ‘Strange Fruit'” knowing that here, about 70 years later, we are talking about the song and hearing the song? The song lives longer than any of the characters in the film.

The only time I get goose bumps when I tell you is when I say it – when I hear you say it. That was so heavy on my mind and it felt like – I was so happy to deliver that. It felt like the final blow. I know I sang this song I know their grandchildren and so on and so forth. The grandchildren of the world sang this song because I made it myself. And so I was armed with that extra layer and played it. So part of me said, “Billie Holiday sang it to him,” and the other part of me said, “Yeah, b ****! We’re going to sing it! Yeah! Yeah!” [Laughs] I said, “You’re right, sister. We’ll sing it.”