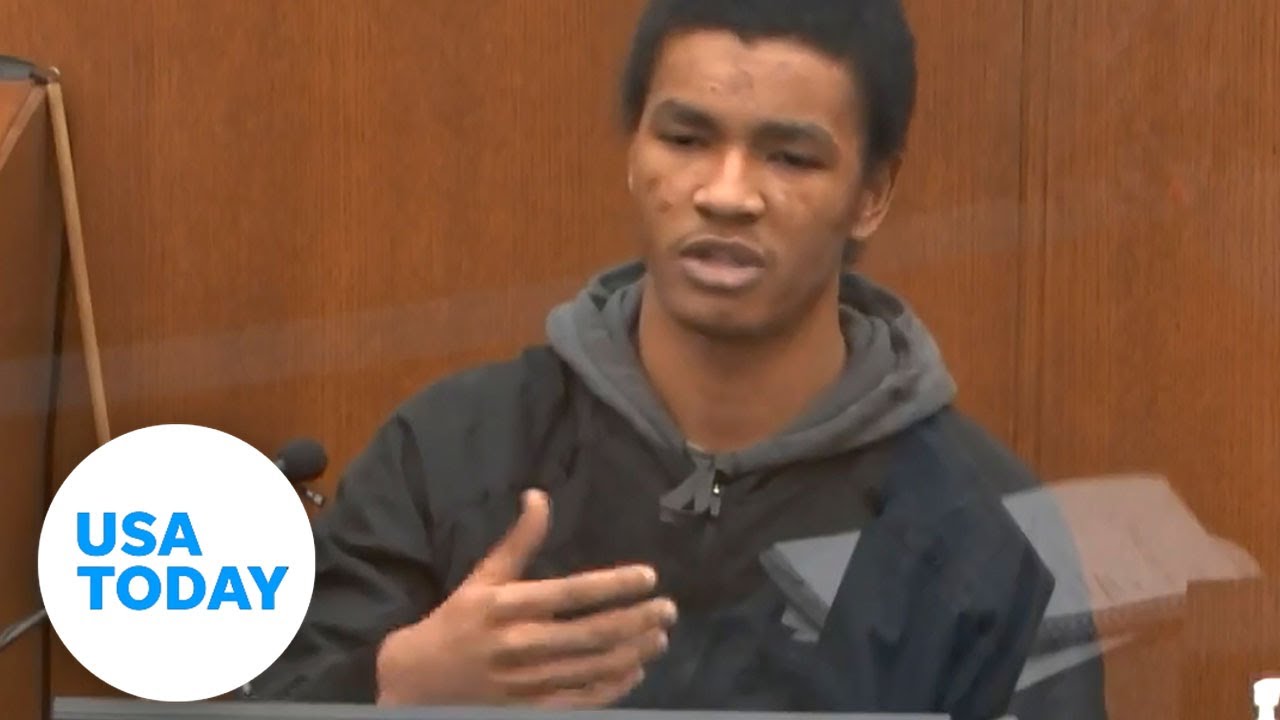 Charles B. McMillian, 61, took off his glasses and wiped the tears from his eyes, saying “oh my god” after seeing video of Floyd calling for his mother and saying “I can’t breathe.” The court then took a brief break before McMillian returned to the stand.

Over the last three days, jurors have heard from 11 witnesses to Floyd’s death, and several have broken down in tears on the stand describing their attempts to intervene on his behalf. Tuesday’s witnesses included a firefighter, 911 dispatcher, a cashier working across the street, a mixed martial arts fighter, the teenager who recorded the now viral video of Floyd’s death and her 9-year-old cousin.

Floyd, a Black man, died in police custody on May 25, 2020, after Chauvin, who is white, pinned his knee against Floyd’s neck for more than nine minutes as Floyd cried out “I can’t breathe” more than 20 times. Chauvin is charged with second-degree murder, third-degree murder and second-degree manslaughter.

He told prosecutor Erin Eldridge he lives near Cup Foods and was driving his 2006 Dodge Caravan at the scene on May 25 when he saw activity with police. He said he saw a police officer outside the door of a blue Mercedes vehicle and pulled over to see what was going on: “Being nosy, you know, being nosy.”

He saw the officers taking the man he now knows was George Floyd out of the truck. “I was looking away, then, when I turned back, I saw Mr. Floyd handcuffed. Then they started to walk him down the sidewalk.” McMillian said Floyd said something, but he couldn’t recall what. At that point, the officers let Floyd sit down, he said.

McMillian said that, five days prior to this happening, he pulled up on a squad car and saw Chauvin, whose face he recognized. He recalled telling Chauvin “what I tell all officers.”

Video shows McMillian wearing a black tee shirt and gray shorts as this was happening. He watched as two police officers walked Floyd to their patrol car. McMillian said he and Floyd started talking. “I was telling Floyd, ‘comply with them, just get in the car, you can’t win.’ “

Video exhibit introduced into evidence by Eldridge shows McMillian walking down the sidewalk and yelling advice to Floyd. “Because I have had interactions with the cops myself, and I understand once you get in the cuffs, you can’t win,” said McMillian, who added he was trying to “make the situation easier.”

The video shows McMillian was the only witness on the sidewalk during the initial struggle with police. He stands with arms on hips – watching, as they are struggling with Floyd, and the car rocks. McMillian moves closer, “I can’t breathe,” Floyd screams. A shoe appears to come off and the officers throw it into the car behind Floyd.

McMillian started sobbing as he watched the video showing Floyd struggling with police. The video showed McMillian had been standing in the street roughly 10-12 feet behind the patrol car with his hands on his hips during Floyd’s struggle with police.

In court Wednesday, McMillian took off his glasses and wiped his eyes as he watched the video, saying “Oh my god.” The court took a ten minute breakbefore McMillian returned to the stand.

Asked what stood out to him about what Floyd said during the struggle, McMillian said: “When he kept saying ‘I can’t breathe,’ and when he said, I can’t breathe, Mama, they’re killing me.” McMillian said Floyd “appeared to be in and out, with foam running out of his mouth.”

McMillian said he did not see the officers actually tie up Floyd. Video from the other side of the street shows McMillian was the only eyewitness with a clear view of the early police struggle with Floyd. As McMillian walked closer, other witnesses joined him on the sidewalk.

“Let him breathe, man,” he yelled to the cops. On audio feed from the scene, McMillian yelled, “Your knee on his neck, that’s wrong, man,” to the officers. He again yelled “you can’t win” to Floyd.

McMillian said in court when the paramedics arrived, “I knew then in my mind and my instinct that it was over for Mr. Floyd.”

Late Wednesday morning, lead prosecutor Matthew Frank questioned Christopher Belfrey, 45, who went to Cup Foods for food on May 25, 2020, and parked his red van on the corner of 38th and Chicago behind the blue SUV Mercedes-Benz that George Floyd sat in with two other people.

Belfrey said he saw two officers approach the vehicle in front of him, and one of them drew a handgun, pointed it and opened the door at whoever was in the driver’s seat.

He said he was “startled” by what he saw and began recording on his phone. He stopped when he saw the commotion. He said he stopped recording because he was “slightly still scared and nervous, one of the officers was staring at me, like why are you recording.”

In the video exhibit, officer Thomas Lane is seen with his gun out and then reholsters it. He talks to Floyd and begins to pull Floyd’s arm to get him out of the car. Officer J. Alexander Keung approaches, and the two are wrestle with Floyd. Floyd can be heard yelling the word “please,” but the sound isn’t clear.

Belfrey said he heard an officer say, “let me see your hands,” and heard Floyd say “I’d been shot before” as they pulled him out.

Belfrey, who was in the car with his fiancée, continued filming. The video exhibit plays without audio of the couple talking. The video shows Floyd, who appears handcuffed, sitting on the ground with his back to the restaurant Dragon Wok and the two officers standing near him.

“One officer went over to the other people in the vehicle and started asking them questions,” Belfrey said. “The other officer had Floyd sit on the ground.”

He then saw the officers placing Floyd in the police car and decided to leave the scene. “I thought he was detained, I thought it was all over, so I kept driving home,” he said.

Nelson had no cross-examination questions for Belfrey.

Cup Foods cashier Christopher Martin, 19, told jurors Wednesday morning that he was the person who took the counterfeit $20 bill from George Floyd — the incident that led to the call to police that brought Chauvin and the other officers to the scene.

Frank played for jurors video — not made public before — from inside the store, which initially showed Floyd acting restless as he flipped through bills before roaming the store, at times appearing to dance or stretch. Jurors seem riveted by the sight of Floyd.

After Martin sold Floyd a pack of cigarettes, he said he noticed the bill was likely a fake, similar in hue to a $100 bill. He explained that the store’s policy was to dock employee’s salaries for the cost of counterfeit bills they accepted for purchases.

‘All from a counterfeit bill’:What we know about fake currency and George Floyd’s death

When Martin went outside with a coworker to get Floyd back into the store, Martin said Floyd seemed like he was awake, countering defense claims that Floyd was taking a nap.

“I saw people yelling and screaming,” Martin said of the “commotion” that developed outside the store once police arrived and he went outside.

“I saw Derek with his knee on George’s neck on the ground,” he said.

Security video outside the store showed Officer Tou Thao pushing one of Martin’s co-workers back on the sidewalk and further from the where Chauvin was atop Floyd. Martin said the video showed the co-worker did not push or touch the police officer.

Martin testified that he experienced emotions of “disbelief and guilt” after Floyd was taken away in an ambulance. “If had just not taken the ($20) bill, this could have been avoided,” he said.

Martin who ultimately left his job at Cup Foods because he didn’t feel safe, said during cross-examination that he thought Floyd “maybe didn’t know” that the bill was a fake.

“He seemed very friendly, approachable, talkative,” Martin told Frank during redirect. “He seemed to be having an average Memorial Day, just living his life, but he did seem high.”

Minneapolis firefighter testimony: Genevieve Hansen says she would have checked for a pulse

Genevieve Hansen, 27, a Minneapolis firefighter and trained EMT, returned to the witness stand early Wednesday. She said Tuesday that she was off-duty on a walk last Memorial Day when she saw flashing lights and heard a bystander yelling.

Hansen teared up Tuesday during testimony about being blocked from helping Floyd as Chauvin had his knee on Floyd’s neck area.

On Wednesday, she acknowledged on cross examination from defense attorney Eric Nelson that she did not have her work ID with her at the time she came upon the scene.

“I was concerned to see a handcuffed man who was not moving with officers with their whole body weight on his back and a crowd that was stressed out,” Hansen said Tuesday

What you missed from Day 2 of the Chauvin trial: Emotional testimony from teen witnesses

Hansen said she was immediately concerned about Floyd because “he wasn’t moving” and “his face looked puffy and swollen.” She also noticed he was in an altered state, no longer responding to painful stimuli – the knee on his neck with body weight behind it.

She said she immediately identified herself because she thought Floyd “needed medical attention.” Hansen said she would have checked for a pulse, called 911, begun chest compressions and had someone bring over an external defibrillator from the gas station to help restart his heart.

She is heard on video begging officers to check Floyd’s pulse. “I could have given medical assistance, and that’s exactly what I should have done,” she said. “(But) the officers didn’t let me into the scene.”

Hansen said she began recording the scene “because memories of witnesses are never going to be as good as a video.”

In a 911 call Hansen made following the incident, she said, “I literally watched police officers not take a pulse and not do anything to save a man,” according to a recording played for the jury.

Witnesses on Tuesday described attempts to call officers off of George Floyd’s body and said they were frightened to approach the officers, who reached for their chemical spray.

Donald Williams, a mixed martial arts fighter, told the court he was on his way to Cup Foods, where Floyd was arrested, when he encountered Floyd “pleading” for his life. Williams told the court he asked officers to stop the “blood choke,” which is a form of chokehold that renders someone unconscious.

Darnella Frazier, the teen who recorded the viral bystander video of the incident, told jurors said she felt in danger because officers placed their hands on their chemical spray when she or others in the group tried to move closer to Chauvin and Floyd. “I didn’t understand why the Mace was even needed at all,” she said.

More:Darnella Frazier, the teenager who recorded George Floyd’s death on video, says it changed her life

Tuesday afternoon, the court heard from Alyssa Nicole Funari, 18, and her 17-year-old friend. The two said they were going to Cup Foods to get an auxiliary cord on the day Floyd died. Funari recorded three videos of the incident with her friend’s phone.

“He looked like he was fighting to breathe,” Funari said of Floyd, adding, “I slowly knew that if he were to be held down much longer he wouldn’t live.”

Funari, crying, said she wanted to intervene but was unable to because “there was a higher power there” – an officer was pushing the crowd back. “There was nothing I could do as a bystander there,” she said, adding, “I couldn’t do physically what I wanted to do.”