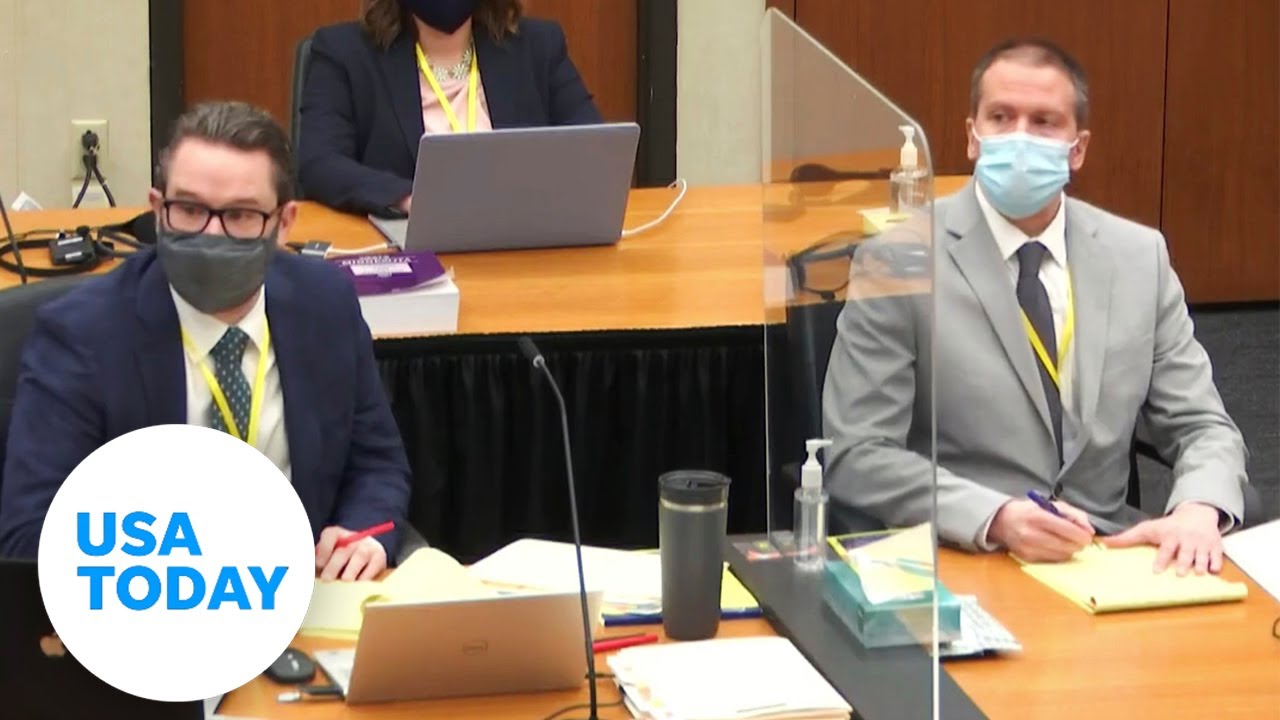 MINNEAPOLIS — Two paramedics took the witness stand Thursday afternoon in the murder trial of former Minneapolis police officer Derek Chauvin and told jurors George Floyd appeared to be in medical distress or dead when they arrived at the scene.

Jurors listened to their testimony and watched body camera footage from an officer inside the ambulance after sitting through hours of police body-camera videos Wednesday.

When viewing video of Floyd’s final moments, bystander and witness, Charles McMillian, 61, broke down sobbing on the witness stand as he recounted his memories of last Memorial Day. Videos shown to the jurors reveal McMillian confronted Chauvin as the ambulance carrying Floyd pulled away from the scene, sirens blaring. McMillian told Chauvin he didn’t respect what Chauvin had done.

“That’s one person’s opinion,” Chauvin said from inside his squad car to McMillian on the sidewalk, according to body-camera video. “We gotta control this guy ’cause he’s a sizable guy … and it looks like he’s probably on something.”

Second paramedic who responded to George Floyd ‘thought he was dead’

Derek Smith, a paramedic with Hennepin County EMS and the partner of Seth Bravinder, responded to 38th and Chicago said he heard “elevated tones used.”

Smith said he noticed on the scene that Floyd wasn’t moving, was handcuffed and was being given no medical attention. He checked for a pulse and found none. He said Floyd’s pupils were large and dilated.

“In lay terms, I thought he was dead. I told my partner, I think he’s dead, and I want to move this out of here,” he said.

Smith checked for a pulse again, found none and took off Floyd’s handcuffs with his handcuff keys before removing him from the scene.

He said one officer rode with paramedics to the hospital. He told the officer in the ambulance to start compressions and he checked for pulse again.

“I was confirming my initial assessment,” he said. I was just hoping to find a pulse.”

Bravinder said he initially was responding to a non-urgent, code 2, call for someone with a mouth injury, but within a minute-and-a-half, it was upgraded to an urgent code 3 and they were on their way with lights and sirens.

When paramedics arrived, Bravinder saw multiple officers on the side of the road on top of “our patient lying on the ground next to a squad car.” He said he “assumed there was potentially some struggle still since they were still on top of him.”

Bravinder parked the ambulance while his partner checked Floyd’s carotid pulse and pupils.

“From what I could see where I was at, I didn’t see any breathing or movement or anything like that,” Bravinder said. He said Floyd appeared unresponsive, in handcuffs.

Bravinder said he asked his partner “‘is he in cardiac arrest?” — meaning was Floyd unresponsive, not breathing and without a pulse. “He said, ‘I think so.'”

Bravinder said a crowd of people had gathered on the sidewalk and they appeared very “upset” and were yelling.

“We wanted to get away from that” because trying to resuscitate someone can be difficult and requires focus, he said.

Prosecutor Erin Eldridge played a clip of officer Thomas Lane’s body camera video, which shows Floyd lying handcuffed, flat on the ground, on his stomach and unmoving as the paramedics bring over a stretcher.

Bravinder is seen making a gesture with his hand, indicating that Chauvin needs to move his knee so that Floyd can be put on the gurney. Bravinder also tries to ensure Floyd’s head doesn’t slam into the ground while he’s moved because his body is limp, according to the video.

Bravinder parked the ambulance about two blocks away. Once in back of the ambulance, he saw the cardiac monitor showing a flat line – indicating no heart activity.

An officer’s body camera video shows Floyd lying shirtless on his back on the gurney in the ambulance as Bravinder places a large device on him to do compressions. Bravinder is seen placing another device on Floyd’s mouth to help deliver oxygen. Meanwhile, Bravinder’s partner is working on an IV for Floyd to give him medications like epinephrine, which is a treatment for cardiac arrest because it helps restart the heart.

Floyd’s condition never changed, Bravinder said, despite efforts to try to pump blood to his organs and restart his heart.

Bravinder said that once there is no pulse, it’s important to begin resuscitative efforts like chest compressions, breathing aid to the patient and IV medication as quickly as possible. A delay “is not good for the outcome,” Bravinder said.

On cross examination, lead defense attorney had Bravinder parse the qualifications of a CPR certification, which police have, compared to an EMTs chest compression, and Bravinder agreed the EMTs underwent more training.

Bravinder told Nelson police can respond to overdose calls with EMS because when people are resuscitated from an overdose, they can become violent or aggressive. Bravinder said, “it can happen sometimes” and he has personally seen it happen.

Courteney Ross, who dated Floyd, recounts meeting: ‘We had our first kiss in the lobby’

Minneapolis native Courteney Ross, 45, who had a relationship with George Floyd for about three years, took the witness stand for the prosecution Thursday morning. She gave jurors their first glimpse at Floyd’s personal life, including times good and bad.

Ross said she met Floyd in August 2017. “It’s one of my favorite stories,” she said, getting emotional and stifling tears as she recounted the romantic beginning.

The day they met, Ross had gotten off work at the coffee shop where she has worked part-time for 22 years. She went to see her son’s father who was staying at a shelter and was waiting in the lobby for him. Floyd worked there as a security guard.

“Floyd came up to me. Floyd had this great deep Southern voice, raspy. ‘You OK, Sis,’ he said. I wasn’t OK. He said, ‘Can I pray with you?’ We’d been through so much, my sons and I. And this kind person asks if he can pray with me. It was so sweet. …We had our first kiss in the lobby.”

Ross said that during early 2020, they had separated for a while. But from March to early May, they were together every day. She stifled tears again after being shown a photo of Floyd.

On cross-examination by lead defense attorney Eric Nelson, Ross agreed that she and Floyd went through ups and down during which one or the other of them, or both of them, used pain pills.

On redirect examination, Frank tried to show that Floyd had not been in immediate danger of dying from the drugs he’d taken in the weeks before his death. “He had a lot of energy. He was playing football, eating, hanging out,” Ross said.

During intense testimony Wednesday afternoon, prosecutors introduced body-camera footage showing George Floyd pleading for his life. Taken together with the store and street surveillance videos, the videos provide a compelling 360-degree view of the encounter, as well as what happened before and after the actual struggle with police.

First to be shown was the body-cam video from officer Thomas Lane, who can be seen on video walking over to Floyd’s SUV. Lane quickly drew his firearm and yelled at Floyd through Floyd’s closed car window to raise his hands. The video became more intense as Floyd appeared to only raise one hand to the steering wheel, seemingly angering Lane, who had been on the job only four days by the May 25 incident.

Officers then take Floyd over to sit on the sidewalk, according to the video from officer J. Alexander Keung, showing a different angle of the same moments. The incident grew more tense as the officers try to force Floyd into the squad car as Floyd pleads with the officers, saying he’s claustrophobic and has anxiety.

Body-cam video from officer Tou Thao gives a view of Floyd sliding across the back seat of the patrol car and out the other side. Then, Floyd is forced to the ground, with nearby bystanders heard warning officers Floyd is going to have a heart attack.

Lane can be seen with what looks like the equipment for a hobble restraint, which is part of the “maximal restraint technique” for a resisting person.

“He’s got to be on something,” one of the officers said, at times guessing if it was PCP because Floyd’s eyes were shifting back and forth.

“I’m through, I’m through,” Floyd says. “You’re doing a lot of talking … it takes an awful lot of oxygen,” an officer says.

Rodney Floyd, George Floyd’s brother, shook his head from side to side, and at one point glared briefly at Chauvin. When prosecutors played the first video, Floyd looked stoic and sad, hugging his midsection lightly and swiveling in his chair. He sat through the second, third, fourth videos of the incident, all from different angles.

According to the videos, Lane is the first person who gets off of Floyd. Chauvin continues to keep his knee on Floyd while a paramedic checks his neck for a pulse. He appears to slightly ease up pressure, but does not take his knee off until the paramedics are ready to load Floyd onto the gurney.

Watching George Floyd die had a ‘profound’ impact on witnesses

On Wednesday, Judge Peter Cahill had to call a 10-minute recess when Charles McMillian, 61, began to sob as he watched the video showing Floyd struggling with police and calling out for his mother. “I feel helpless,” McMillian said, struggling to regain his composure in court. “My mom died June 25th.”

Almost everyone who has testified in Chauvin’s trial became choked up on the witness stand Tuesday and Wednesday as they described watching Floyd go unconscious and lose his pulse. Many expressed regret that they couldn’t help Floyd.

Sometimes survivors of traumatic events hold a “false belief” about their role – for example, that they could’ve saved Floyd from dying, said Nadine Kaslow, a professor of psychiatry and behavioral sciences at Emory School of Medicine.

Witnessing a severely traumatic event – such as Floyd’s death – in person can have “profound” psychological effects, both short and long term, she said.

“It will impact them for the rest of their lives,” Kaslow said. “When people are telling the story, it’s almost like they are reliving a lot of memories.” Read more.