Emma Hayes column: ‘English clubs are really behind in Europe – but the gap has closed’

Emma Hayes MBE has been with Chelsea since 2012 after working for the American club Chicago Red Stars. Previously, she was Deputy General Manager at Arsenal. With Chelsea, Hayes has won three women’s Super League titles – including the club’s first in 2015 – as well as two FA Cups and a Spring Series. She is widely considered to be one of the best managers in the country.

Are we ready to reach the next stage in the Champions League? That’s a big question.

After our 2-1 quarter-final win in the first leg against Wolfsburg last week, I thought: “Phew, we still have a lot to do in Europe!”

We definitely closed the gap, but there is another level that I think is necessary to win the Champions League that we have to show. Of course my ambition is to win it, but it’s not that easy.

As English clubs we are really behind. Five, six or even seven transmission windows don’t necessarily solve this.

We’ll meet two-time champions Wolfsburg in the second leg on Wednesday, and their experience of being in this phase year after year is an advantage.

While English clubs are investing more now, the reality is that all of these other clubs across Europe are doing the same. It’s not that they stand still.

Filling the gap for me is something that is so easy to underestimate because people see names on the team sheet and think, “They have these players, so they are the favorites to win”.

They don’t really acknowledge that building teams to compete in Europe takes a lot of time and setbacks.

English clubs were not really respected by our European colleagues because we didn’t necessarily complete the last stages regularly, and that’s fair enough.

The reality, however, is that the void is closing and our performance the other night showed it.

Why European teams are relentlessly professional 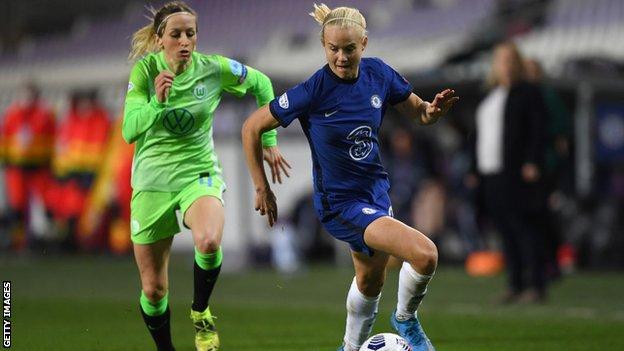 You need luck in Europe, there is no doubt about that. I think back to when we won at Arsenal in 2007, the only time an English club has won.

We beat Swedish team Umea 1-0 in the final over two legs, but the number of times they hit the post and the crossbar in the second leg showed the luck you need.

They also need enough match winners that we had last week. They make all the difference at the top level.

I think there are some players who show up for the Champions League in other ways. You like the big stage.

But I also think it’s a stage for those who thrive and love pressure. Seeing Niamh Charles the other night confirmed something I already knew – that she will be a great player for England.

There is no doubt that our recent signings Sam Kerr, Pernille Harder, Melanie Leupolz and Jessie Flemming are pedigree players.

This pedigree is their will to gain daily, their daily behavior, how they exercise, eat, interact, contribute – all of those things.

They have a thirst for learning and the ability to take feedback to help them improve further. They also have the option to keep their ego in check if need be, but raise the bar.

What is underestimated about top European teams is how relentless they are and how professional they are across the squad.

The squad is used to some people not playing for long minutes, but it’s important to keep track of them – how they exercise, how they eat, how they behave.

I remember hearing a comment about Lyon’s locker room and that they are only there to win and that’s it. It’s not always nice.

Of course, you have to have spirit in the locker room to get there, but you have to make sure that everyone around you really gets what it takes to get to the very top.

I still think we’re learning that. We haven’t been professional for that long. That’s what matters.

“We must be ready to suffer”

If you zoom out and think about it, Chelsea had never beaten, or even been close to, Wolfsburg before last week.

There’s a reason for that. A few signings not only close this gap. It helps when you have a squad that has been together and your prep builds over time.

I am aware of my own expectations, but not so much those of everyone else. I’m realistic and we have to roll up our sleeves.

Wolfsburg is unscrupulous. You are prepared to deal with your domestic threats, but when you get into a European game – whether your opponent is Barcelona or Wolfsburg – they are completely different.

You have to accept that certain things cannot be achieved. Your playing style must be able to adapt; it needs to evolve and have different mechanisms for different situations.

That’s what I consider coaching to be. For example, every team wants to own the soccer ball, but what is your purpose with it? What is the opponent doing to make this more difficult?

If you play in Europe you will not dominate the ball against Barcelona. It just won’t happen.

We cannot carry one person if we want to achieve the ultimate. Last week was a good wake-up call for our own players that we have to be ready to suffer if we are to reach the semi-finals.

Emma Hayes spoke to BBC Sport’s Emma Sanders. You can read her column every month on the BBC Sport website and app.

How to Stack a 2 Layer Cake

School Choice Advances in the States