Satterthwaite hit 119 and Amelia Kerr made 72 in order not to lead the hosts to the goal with 20 balls.

Reigning 50-over world champions England win the series 2-1, but the defeat ends a run of 10 straight wins in all formats.

“I’m definitely frustrated,” said Knight. “But I like that we have been tested.

“Of course we want to keep winning, but we will probably get more out of this game than we did from the first two, which is very positive at next year’s World Cup.”

This marks the White Ferns’ first ODI win in 12 games and a first in format captaincy win for Sophie Devine, who took the role for good last July after former skipper Satterthwaite returned from maternity leave.

“Amy Satterthwaite was leading from the front and Amelia Kerr is a weapon, but our bowlers also had a chance to shine as England have been able to have a crack in the last 20 overs and we put them back.”

Satterthwaite was the 10th woman to complete 4,000 ODI runs and the third New Zealander after Debbie Hockley and Suzie Bates to miss that streak with a shoulder injury.

England stumbles in search of a clean swing 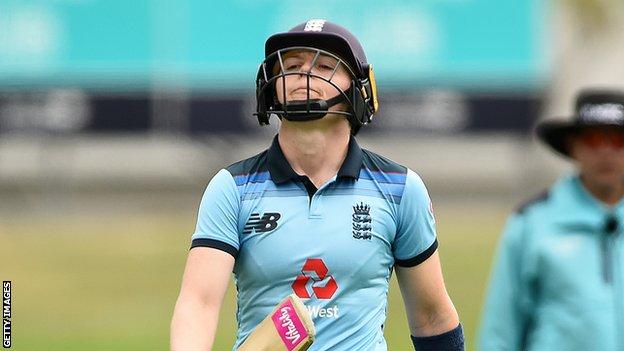 Aside from Tammy Beaumont, England struggled after the release of Captain Heather Knight

After the early loss of opening player Danni Wyatt, England started well. Beaumont and Knight put up a stand of 109 before the skipper was caught by leg spinner Amelia Kerr lbw.

“I’m frustrated with the moment I got out when the game broke up and the Kiwis were very good at taking wickets on a regular basis,” said Knight.

Unlike in the two previous games, England’s top rank could not enter into any substantial partnerships. A middle rank has had no time lately as no other batsman has scored more than 15 goals.

Nat Sciver fell to Brooke Halliday for 12 and wicketkeeper Amy Jones was caught and bowled by seaman Jess Kerr for 15 to leave England 161-4.

The tourists lost their last six wickets for just 59 runs, with Devine removing Fran Wilson and returning Lauren Winfield-Hill before Amelia Kerr cleaned up the tail and ended up 4-42 out of 8.5 overs.

It meant no one was able to adequately support the in-shape Beaumont, who scored her third half century in a row as a player in the series, ending unbeaten with 88 of 113 balls, including seven fours.

New Zealand was left out for less than the 221 target in the first two games and the openings were cheap again. Natalie Dodd was fired by the recalled Freya Davies, and Hayley Jensen was bowled by Sciver.

That left the hosts 15-2 before Satterthwaite and Devine stabilized the innings until they were caught by Kate Cross for 15 lbw.

Despite the lack of rested fast bowler Katherine Brunt, England bowler Amelia Kerr initially worried but she settled in before playing some skillful strokes.

She combined with the Satterthwaite experience for 172 – New Zealand’s highest partnership with the fourth wicket in ODIs.

They held up consistently well at the required level, with the left-hander Satterthwaite playing the more offensive stroke when she hit 10 fours and two sixes and her seventh ODI century with 120 balls and the first in four years.

All-rounder Amelia Kerr, named player of the game, hit seven foursomes, including the final limit ahead of Sciver, to lead the hosts to 223-3 with 46.4 overs.

“The Kiwis were great at the way they chased it. We had to dig a little for gates and that meant we couldn’t get across the border,” Knight said.

“Our bowling performance was fine, there is room for improvement, but the main reason we lost was because we were 30 runs short.”

Unlike the first two ODIs, this match was played behind closed doors after a new ban was introduced in the country.

The two teams face each other again in a three-game Twenty20 series that begins Wednesday in Wellington after being relocated from Auckland due to lockdowns.

The first two T20s will also be played without a spectator. The decision on whether the fans will participate in the third T20 on March 7th is still pending.