West Ham manager David Moyes called referee Mike Dean’s decision to send off Tomas Soucek “embarrassing” as the Hammers drew with Fulham – and missed a chance to move into the top four of the Premier League.

The Hammers ended with 10 men as Soucek was shown a straight red card for elbowing Aleksandar Mitrovic in injury time.

As the pair jostled for position at a free-kick, Soucek raised his elbow and caught the Fulham striker in an incident that looked accidental.

However, following a lengthy video assistant referee check, Dean was advised to check the incident himself, with VAR official Lee Mason telling Dean to look at Soucek’s “clenched fist”.

Dean, taking a few minutes to make his decision, repeatedly watched the incident on the pitchside monitor and eventually sent him off for violent conduct.

“It was obvious to everyone it was accidental. He [Dean] obviously didn’t see it and looked at the screen and I’m really embarrassed he chose to send him off.

“We want them to get the decisions right. I find it really difficult that someone back at Stockley Park [where the VAR officials are based] would not say ‘this is accidental, let’s get on with it’.

“It has come down to a poor refereeing decision and a poor VAR Stockley Park decision and we can’t do much about it.

“It’s unfair to the boy. I’m sure they will come up with enough excuses to justify the reason for sending him off.”

Fulham boss Scott Parker agreed that Soucek, who will miss an FA Cup game against Manchester United and Premier League matches against Sheffield United and Tottenham, did not deserve to be dismissed.

“It probably was a bit harsh and the game is becoming very sterile,” said Parker. “I don’t think it was a sending off but that’s the way the game is going.”

In a quiet first half, both sides only managed one shot on target each – the visitors’ Declan Rice having an effort saved by Alphonse Areola and Ivan Cavaleiro heading tamely at Lukasz Fabianski for the hosts.

West Ham’s Vladimir Coufal then headed against the crossbar from Rice’s cross from the left.

Tosin Adarabioyo could have given Fulham all three points but narrowly headed over from eight yards out as neither side could make the breakthrough.

West Ham would have gone above Liverpool with victory, but stay fifth, one point behind last season’s champions, who host league leaders Manchester City on Sunday.

Fulham have now not won in 14 matches in all competitions, since a 2-1 victory at Leicester City on 30 November, and remain 18th – in the relegation zone.

Europe-chasing West Ham may be happy with a point

West Ham came into this match in a great run of form with seven wins in their past eight – and that one defeat was against Liverpool.

Although Fulham had the greater share of possession, the best chance fell to Coufal, but the woodwork denied the Czech defender his first goal for the club.

His countryman Soucek, looking for his ninth Hammers goal of the season, should have done better when he met Jesse Lingard’s cross but could not keep his header down.

However, it has still been a great campaign so far for West Ham, who finished 16th in 2020-21, but are hoping to qualify for European competition for the first time since they finished seventh in 2015-16 under Slaven Bilic.

In the end, West Ham were hanging on and may regard this a decent point.

Fulham began the day eight points adrift of Burnley and Newcastle, although Burnley drew 1-1 against Brighton and nine-man Newcastle beat Southampton 3-2 to increase the pressure on Scott Parker’s side.

But this latest draw keeps the Cottagers eight points from 17th and in grave danger of making an instant return to the Championship after winning the play-offs to get promoted last season.

When these sides met in November, West Ham won 1-0, but Fulham missed a glorious chance to equalise in injury time as Ademola Lookman’s weak chipped ‘Panenka’ penalty was easily saved by Fabianski. 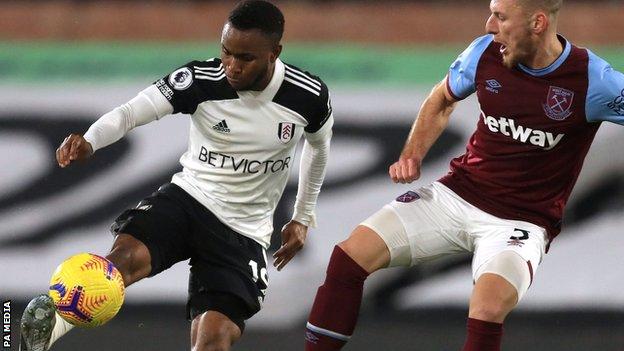 Lookman was one of Fulham’s positives in a quiet first half at Craven Cottage as he twice created space for chances, but could not hit the target.

Fulham started the second half brightly as Bobby Decordova-Reid volleyed over and Loftus-Cheek, when played in by Lookman, shot into the side netting.

But once again Fulham’s lack of ruthlessness in front of goal cost them as Adarabioyo headed just over and Cavaleiro missed the target when unmarked.

Manager Parker handed a late debut to striker Josh Maja, signed on loan from Bordeaux on transfer deadline day, and also brought on Mitrovic in an attempt to get what would have been only their third league win of the season.

They had chances too, but Mitrovic and Loftus-Cheek failed to take the opportunities on another frustrating day for the Cottagers.

Another London derby without a win for Fulham – the stats

‘From start to finish we were superb’ – what they said

Fulham boss Scott Parker told Match of the Day: “It’s a tough one to take because I felt from start to finish we were superb.

“We had 20-odd shots and our finishing was probably the deciding factor. We caused them loads of problems. The players executed the plan superbly – we were a real threat.

“We know what the difference is at this level. This is a group of players working tirelessly and I saw that today.

“We need to get that win, we need something to drop for us.”

West Ham boss David Moyes told Match of the Day: “We didn’t play as well as we have been – sometimes the games can catch up on you quickly.

“Fulham were the better team – we cant deny that. I don’t think the quality of our play was right from the start. Several things didn’t work from the start.”

Fulham have a week without a match as they do not play again until Sunday, 14 February when they are at Everton in the Premier League (19:00 GMT).

West Ham play at Manchester United in the fifth round of the FA Cup on Tuesday (19:30), before returning to league action on Monday, 15 February as Sheffield United are at London Stadium (18:00).

Player of the match

Opinion: How to be truly anonymous in the digital world