On his days off after training in Monaco, Julien Serrano was free to stroll through the glittering streets of Monte Carlo.

He and his girlfriend could admire the eye-catching super yachts in the Grand Port, have a leisurely lunch in the sun or flutter in the Casino de Monte-Carlo.

At work, he trained with Kylian Mbappe, Cesc Fabregas, Radamel Falcao and Fabinho, while coach Leonardo Jardim watched in the shadow of the cliff above La Turbie, Monaco’s idyllic training ground.

Now, the 23-year-old Frenchman can’t even enjoy Livingston’s shopping malls and roundabouts due to Covid-19 as he searches for points in the Tony Macaroni Arena. Despite this rather cruel comparison, Serrano looks forward to the challenge.

“I have to play,” he explains. “I have to have a full season because I’ve played so few games in years. I have to start my career because I’m young and I want to develop.

“Scotland is different – first the weather. It’s a very good country, but we can’t go out with Covid if we want. In my first two months we were in Edinburgh, Glasgow and the Highlands were beautiful.”

Serrano was born in Aix-en-Provence, a stunning town in southwestern France, but grew up in the small town of Mallemort, 45 minutes north by car.

His family loved sports, but football came naturally. At the age of 13 he moved to an academy in Aix-en-Provence, where he went to school during the week, trained and played on the weekends.

At 15, Monaco called and packed his bags for the principality while he left his family in Provence. Fortunately for a young Serrano, he was used to living away from home and the potential reward for training at one of France’s most prestigious academies was clear.

In 2016 he was part of the team that, alongside Mbappe, won the Coupe de Gambardella, a prestigious U19 cup competition between the French elite clubs.

“He was a good player then and a brilliant player now,” says Serrano with a grin after watching his old team-mate tear Barcelona apart in the last 16 of the Champions League.

“I don’t speak to him anymore, he’s on a different path from me. If I saw him in a game, we wouldn’t be talking to any problem.”

Who was faster back then? “Him! It is better to learn to defend yourself against him, it is very good to take [your game] a level higher. “

Monaco was a good place when Serrano joined, and it wasn’t just the Mbappe effect. Jardim led the team to the Ligue 1 title and the semi-finals of the Champions League in 2016/17.

Serrano didn’t play often, but he learned a lot from people around him. The training with Fabinho, Bernardo Silva and Benjamin Mendy will definitely rub off.

“When I started in Monaco they were a big team. All of them helped me adapt to the first team – Falcao most of all. He was a good player and he talked to me a lot about my positioning and my crossing of the small ones Details. He was brilliant in the box. “

After several players, then coach Jardim, left Thierry Henry, he arrived in Monaco in 2018 for an unfortunate stay. In a 2-0 defeat against Borussia Dortmund, he gave Serrano his Champions League debut from the bench. Now David Martindale is the man supposed to get the most out of Serrano.

He had barely heard of Livingston before his agent told them she was interested in a loan deal last summer, but Serrano is enjoying his time at West Lothian and the move is a testament to Martindale’s own range of contacts in the game. 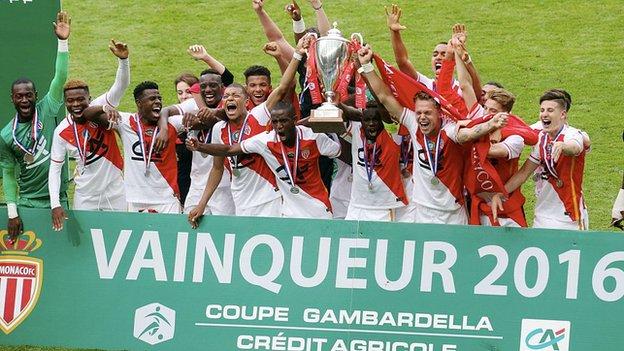 Although Serrano initially struggled to understand his incredibly vocal manager – “it’s Scottish, not English” – he was an important part of the undefeated 14-game run that ushered in the Martindale era.

“I enjoy working with him,” says Serrano. “He wants perfection, and I like that.

“He always talks to me about the little details. I like him telling me [what he wants]instead of saying nothing and I don’t know what he’s thinking. When he talks to me I know what to do, it’s better. “

While Livingston has way more to offer than meets the eye, hard work is the fundamental pillar. Even if Serrano comes from an environment like Monaco, he is surprised by his commitment.

“Here we work very hard compared to France, from the gym to training,” he says. “We have a good training intensity and we need that for the games.

“There is more contact, more duels. That is the biggest point, the intensity. On the pitch, everyone works very hard to achieve a result. On the pitch, it’s one thing, in the dressing room it’s another …”

Serrano is said to enjoy an off-field laugh and is prone to the weird random outburst. He chuckles as he talks about the fun the team has together, another key element in their success.

Under contract in Monaco until the summer of 2022, he was able to return this summer with a medal as the final of the League Cup on Sunday with St. Johnstone in Hampden.

Has the exchange of the glamor of Monte Carlo for Livingston of Scotland stopped him? Far from it.

“When I have a good opportunity to sign here [Scotland] again why not? “