Patrick Bamford is the sixth highest goalscorer in the Premier League on 12, four behind Liverpool’s Mohamed Salah

Patrick Bamford scored the 100th goal of his career as Leeds United gained a deserved victory over Crystal Palace to move into the top half of the Premier League table.

The 27-year-old finished into an open goal to make it 2-0 as he converted a rebound after Eagles goalkeeper Vicente Guaita had parried Raphinha’s shot.

Earlier on, Leeds had taken a third-minute lead when Jack Harrison’s strike from the edge of the penalty area took a big deflection off Gary Cahill and looped past Guaita.

Bamford’s century of goals includes 21 on loan at MK Dons, eight on loan with Derby, 33 with Middlesbrough and 38 with his current side.

“The most important thing is getting the three points but it is nice to get to 100 career goals,” said Bamford, who was with Chelsea for five years but had seven loan spells elsewhere and never played a competitive game for the Blues.

“It is probably long overdue but nice to get there.”

The victory moves Leeds up from 11th and above Arsenal to 10th, while Palace, who themselves would have gone into the top half with a win, remain 13th.

Bamford’s 12th Premier League goal of the season means only two English players – Tottenham’s Harry Kane and Everton’s Dominic Calvert-Lewin, both with 13 – have scored more goals than him.

“What a player he has been this season for Leeds,” said former England striker Chris Sutton on BBC Radio 5 Live.

“People doubted whether he could score goals at this level but he has done. I would give him a go for England. I really like him, he has proved a lot of people wrong this season.”

England have three World Cup qualifiers at the end of March – at home against San Marino and Poland with an away game in Albania in between.

Bamford said he did not expect international recognition but it was nice to be talked about.

“If you had said that at the start of the season I would’ve brushed it off and said ‘you’re mad’, but now people are talking about it,” added the former England Under-21 forward.

“We have four or five strikers that have not been involved in the England squad many times and they are doing well so it will be interesting to see who gets called up.”

Bamford, who failed to score in a nine-game loan spell with the Eagles in 2015-16, could have got on the scoresheet in the first half but saw a header saved by Guaita and then shot wastefully over the crossbar with only the goalkeeper to beat.

Raphinha and Pascal Struijk had opportunities to also score for a dominant Leeds and Harrison nearly grabbed his second and Leeds’ third late on but saw his effort rebound off the crossbar.

Leeds won the Championship last season as they ended a run of 16 seasons outside the top flight and while the two teams that came up with them – West Brom and Fulham – have struggled and are in the bottom three, Marcelo Bielsa’s side have thrived.

This was their 10th league win of the season and Leeds are aiming for their first top-10 finish in English football since they came fifth and qualified for the Uefa Cup in 2001-02.

It was one of their most straightforward outings of the campaign and they never looked like squandering the lead given to them by Harrison’s early goal. 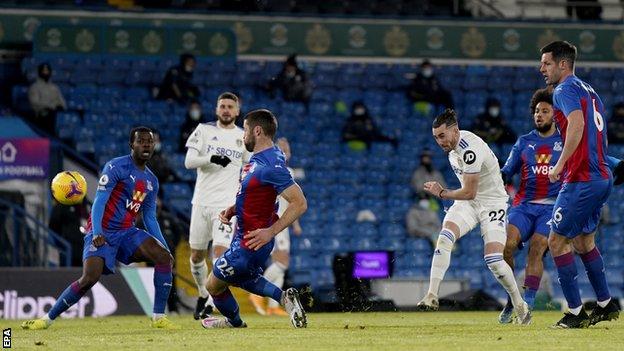 The excellent, skilful Raphinha curled a free-kick over the top and then had a shot on the turn blocked by a desperate Cahill challenge as Leeds continued to create chances.

Struijk missed two good headed opportunities but those misses did not prove costly as Bamford followed up after Raphinha’s shot was parried to score the home team’s second.

The only downside for Leeds was an injury to England international Kalvin Phillips, who went off late in the second half with what looked to be a calf injury.

Palace were without top goalscorer Wilfried Zaha after the Ivory Coast winger injured a hamstring in the 2-1 win at Newcastle on Tuesday and Roy Hodgson’s side desperately missed their talisman.

This defeat means Palace have now lost 17 of the past 19 games in which Zaha has not played, including all four Premier League matches without him this season.

The injury-hit Londoners could only name six substitutes and handed a debut to French striker Jean-Philippe Mateta, who joined the club on loan from Bundesliga outfit Mainz in January.

But his first involvement saw a clearance bounce off him in the build-up to Leeds’ opening goal.

The Eagles had won their past two matches but were outplayed in the first half, with only 33% of possession, one shot on target and one corner.

Roy Hodgson brought on Andros Townsend for Patrick van Aanholt at half-time in an attempt to get back in the game, but they found themselves two goals behind six minutes later.

Michy Batshuayi replaced the ineffective Mateta after 65 minutes and set up Eze, who blazed well over.

Hodgson also introduced another striker, Christian Benteke, and he had an effort saved by Illan Meslier as Palace left Elland Road empty-handed.

Another blank for Palace on the road – the stats

‘Disappointed in the way we started each half’ – what they said

Leeds United boss Marcelo Bielsa, speaking to the BBC, said: “It was a deserved triumph. We could have scored a few more goals. We defended well and conceded very few chances.

“The performance of the team was even and constant. It was an objective for today [to keep a clean sheet]. It was very important we didn’t concede a goal today.”

Asked if Leeds were looking at the Europa League places, Bielsa replied: “It’s too early. Right now we don’t have the consistency to imagine any higher up the table.”

Crystal Palace manager Roy Hodgson, speaking to the BBC, said: “Everything depends upon the opposition and we met a good team. I’m disappointed in the way we started each half. It is of course going to put you on the back foot against any team, not least one of Leeds’ quality.

“You try to encourage your players not to make mistakes in those moments to give your opposition a head start if you like. I don’t think we created enough to get back into the game and we had to work really hard to make sure they didn’t score more goals.

“I didn’t think our passing was as good. The pitch was difficult for both teams which doesn’t help when you’re the team chasing the game and trying to get back into it.

“They are maybe more used to it. It’s not the reason we lost the game but it may have affected the way we were able to pass the ball which I didn’t think we did well enough.”

Player of the match

Why Democrats Want a Trump Trial

Teachers In Maine Try To Connect With Students Struggling With Remote Learning : NPR