In August 2020, the league helped launch the rugby against racism initiative and gave time “to honor equality” before the games.

But seven months later, Monye told BBC Sport that the Premiership’s actions were “just lip service” and “nothing more than PR”.

“If they cared about it, they would do something,” he added.

A Premiership Rugby spokesperson said: “Premiership Rugby is committed to making rugby a more diverse, welcoming and inclusive environment for our employees, players and fans in the UK professional club, while supporting social change.”

In September 2020, the Marland Yarde sales wing said it was racially abused by a viewerexternal link during a Premiership game earlier in the season.

Monye said that while Premiership Rugby has stressed the importance of enhancing diversity in the sport and making sure all players feel safe and secure, “no logs of racist incidents have been drawn up”.

He continued: “Premiership Rugby CEO Darren Childs said on TV back in August the importance of improving representation in rugby.

“They promised to put in place a policy against racial abuse during the Games and to circulate it to all Premiership teams, coaches and players.

“Marland Yarde was racially abused in a game in late February 2020. He didn’t know what to do about it.

“Since then, Premiership Rugby has only put two pages together. That could have been done in five minutes.”

“Effectively, if you are being racially abused, tell a referee about it.

“This document was sent to Marland Yarde – a player from across the Premiership.”

Premiership Rugby said players may “raise concerns” at their clubs, adding “many will have their own policies or processes”.

“For a player, his team manager can be a good point of contact as he speaks to him regularly about various topics,” continued a spokesman for Premiership Rugby.

“Most importantly, anyone in rugby can contact the rugby football union to raise concerns and the RFU will always investigate.”

“I would expect more to have happened” 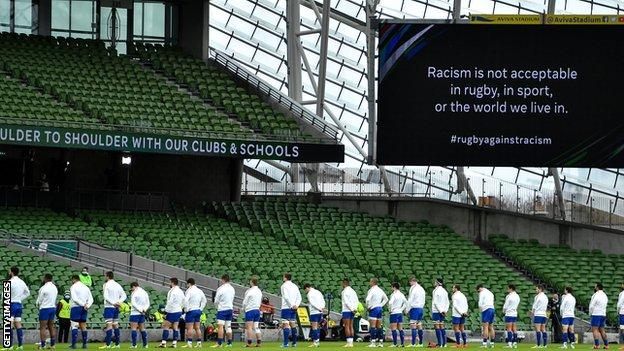 Monye, ​​who spent his club career with Harlequins, praised the work of the RFU and the Rugby Players’ Association for Diversity and Inclusion as “great”.

All teams in the six nations observe a minute’s silence before the games.

The 37-year-old expressed frustration with players ‘coverage of the players’ decision to kneel or stand in silence before matches.

“I respect players who take the knee and those who don’t,” he said.

“Seven months after rugby first put together an anti-racism campaign, I would expect more to have happened.

“Why should players advocate a debate on social media if it isn’t really something?”

“The reason we wanted to acknowledge was to start a debate that would lead to action.

“Certain stakeholders in the game have chosen not to do anything and I think that’s because they don’t care enough.”

Premiership Rugby said it made five commitments when it launched Rugby Against Racism in August.

Premiership Rugby said it was “delighted to see the rugby project continue,” adding, “Work has been done to meet the other four commitments and we look forward to receiving input from rugby’s new Diversity and Inclusion Board Players’ Association to get next steps for each of them. “

“Words are empty if nothing changes”

Monye said he was “tired” of talking about racism, adding, “I don’t want to have another talk about it unless it actually leads to significant change.”

The former British and Irish Lions supported the silence of the minute before the international games, but stressed that such statements of support must be followed by action.

“A minute’s silence is one thing, it’s a moment for reflection,” he said. “If we take a moment to think and do nothing, what is it about?

“I don’t mind what mission statements are, I care about the measures you take to fulfill them. Words are empty if none of them is mentioned.

“I hope the Premiership will respond not only with words but also with action.”

Twitter’s upbeat revenue goals boost the stock, but some analysts aren’t buying it