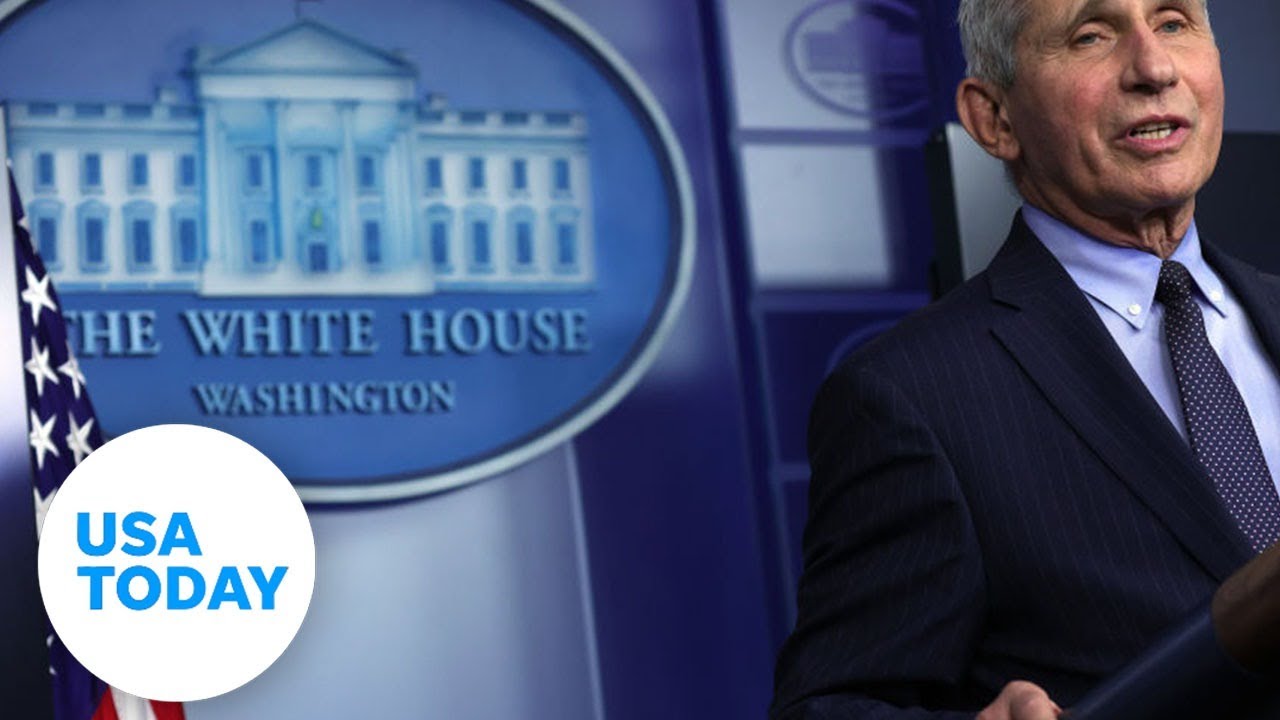 Government vaccine distribution partners “have all faced challenges as workers have been snowed in and unable to get to work to package and ship the vaccines,” said Andy Slavitt, White House senior adviser for COVID-19 response.

Some vaccines were sitting “safe and sound” in factories and hubs, and approximately 1.4 million doses were being transported Friday, Slavitt said. UPS and FedEx will be making Saturday deliveries, and all backlogged doses would be delivered “within the next week,” he said.

“We will be able to catch up, but we understand this will mean asking more of people,” Slavitt said. “If we all work together, from the factory all the way to vaccinators, we will make up for it in the coming week.”

Meanwhile, Slavitt announced the U.S. plans to open five more community vaccinations centers, including one in Philadelphia, and four in Florida, in Orlando, Miami, Jacksonville and Tampa.

USA TODAY is tracking COVID-19 news. Keep refreshing this page for the latest updates. Want more? Sign up for our Coronavirus Watch newsletter for updates to your inbox and join our Facebook group.

►The FDA is reviewing data from the Johnson & Johnson vaccine trial and plans to consult with the agency’s independent advisory committee Feb. 26. “We should be hearing from them soon,” Dr. Anthony Fauci said Friday.

►Pfizer on Friday said it was seeking authorization to store its vaccine in normal pharmaceutical freezers, instead of the ultra-cold temperatures doses currently require.

►After weeks of tense negotiations, California legislators agreed Thursday on a $6.5 billion proposal aimed at getting students back in classrooms this spring following months of closures because of the pandemic.

►President Joe Biden on Friday is set to visit Pfizer’s COVID-19 vaccine manufacturing facility near Kalamazoo, Michigan, where he’ll continue to make the case for his nearly $2 trillion COVID-19 relief package as Democrats prepare to push it through Congress.

►In a seven-day period ending Thursday the United States reported fewer than 2,000 COVID-19 deaths a day on average, the first time that’s happened since the beginning of December, a USA TODAY analysis of Johns Hopkins University data shows. The 13,841 deaths reported in the latest week is down 41%, almost 10,000 deaths, seen in the peak week last month.

►Two women in Florida dressed as “grannies” to try to get their second shot of the COVID-19 vaccine, an Orange County health official told local reporters on Thursday. The young women wore bonnets and glasses, and Dr. Raul Pino said they were successful in getting their first shots.

►Vaccine shipment delays have been reported by news outlets in more than a third of the U.S. due to the winter storm walloping much of the country, forcing sites to close and cancel appointments due to a lack of shots.

📈 Today’s numbers: The U.S. has more than 27.8 million confirmed coronavirus cases and 493,000 deaths, according to Johns Hopkins University data. The global totals: More than 110.2 million cases and 2.44 million deaths. More than 73.3 million vaccine doses have been distributed in the U.S. and about 57.7 million have been administered, according to the CDC.

Fauci: We’ll have data on vaccines in teens by fall

It is “highly likely” the U.S. will have early data of the effectiveness of COVID-19 vaccines in teens by early fall, but possibly not in time for the start of school, Dr. Anthony Fauci said Friday.

“We anticipate data on high-school age individuals, namely individuals 12 to 17 years old, by the beginning of the fall,” he said.

Moderna is currently enrolling people 12 to 17 year-olds in trials, he said. Starting in April, Pfizer will begin studying vaccine in children ages 12 down to 5, with full data expected in the first quarter of 2022, Fauci said

Biden to pledge $4B to global vaccine alliance

President Joe Biden is set to announce a $4 billion U.S. commitment to the global vaccine alliance known as COVAX, aimed at helping poor countries inoculate their populations, according to a senior administration official.

Biden will outline the pledge during Friday’s virtual meeting with G7 members. The White House plans to release $2 billion immediately and use the additional $2 billion as leverage to get other wealthy nations to contribute to the global vaccination effort, according to the official, who briefed reporters on the condition of anonymity.

The European Union’s executive commission also plans to double its contribution to the program, with a commitment of about $1.2 billion.

‘Unethical and unconscionable’:Richer nations getting more COVID-19 vaccines than poorer

In December, COVAX officials said they had a shortfall of more than $4 billion in pledges that, if not filled, would result in a “a protracted pandemic, with severe economic consequences” for rich and poor countries alike.

Scientists and advocates fear that if wealthy nations hoard vaccines, the novel coronavirus will continue to mutate and could return to threaten the U.S. and others.

More contagious variants are already circulating in the U.S. and across the globe. The Centers for Disease Control and Prevention reported Thursday that at least 1,549 cases of the coronavirus variants first spotted in the United Kingdom, South Africa and Brazil in the U.S.

Pfizer says vaccine can be stored in normal freezer temperatures

Pfizer and its collaborator BioNTech on Friday said they were seeking an update to their emergency use authorization from the Food and Drug Administration that would allow their COVID-19 vaccine to be stored at normal freezer temperatures.

Currently, the vaccine is required to be stored between -112°F to -76°F and is shipped in a special thermal container full of dry ice to keep it at its ultra-cold temperatures.

Pfizer and BioNTech said new data show that doses remains stable when stored for up to two weeks between -13°F to 5°F, which are more common temperatures for pharmaceutical freezers.

The companies said the new temperatures can be an alternative or complement to the existing ultra-cold storage, which keeps doses viable for up to six months. Doses can also be stored for five days at standard refrigeration temperatures, between 36°F and 46°F, before they must be administered.

Pfizer and BioNTech vaccine is highly effective in preventing COVID-19, but public health and logistics experts have said its ultra-cold storage requirements are one of its limiting factors in making the vaccine widely available around the world.

Innova Medical Group’s top executive would like to use the rapid tests to slow infections closer to home, but Innova has not yet secured Food and Drug Administration authorization to sell the tests in the United States.

Experts say the United States could quickly expand the nation’s limited testing supply and improve speed by authorizing rapid, paper-based antigen tests such as Innova’s diagnostic. Advocates say these tests are cheaper, easier to make and can be used two to three times each week to detect when someone is infectious and likely to pass the virus to others.

The drawback: Rapid tests are less precise when compared to lab tests, which take longer to complete and cost $100 or more.

More studies are underway to demonstrate the accuracy of Innova’s test, which costs less than $5 and can deliver results within 30 minutes. Researchers at Harvard, the University of California, San Francisco and Colby College have evaluated the test and other private research groups are conducting trials on people with or without coronavirus symptoms, said Daniel Elliott, president and CEO of Innova Medical Group.

CVS Health plans to contact Americans living in underserved communities to help them schedule COVID-19 vaccine appointments amid signs that white people are getting the free vaccine at higher rates than Black Americans.

The drugstore chain said Friday that it will call, email and text-message people living in what the federal government has deemed socially vulnerable areas to provide assistance and education in the vaccine process.

The move also comes as reports circulate widely that Americans are struggling to navigate various scheduling systems, website crashes and a sluggish rollout of the two vaccines approved so far.

CVS also said it will hold vaccine clinics in the most vulnerable communities it serves and send vaccination caravans into neighborhoods to make it easier for people to get their shots.

Research published in 2020 concluded that about 34% of COVID-19 deaths in the period studied were Black people, though they make up only 12% of the American population. CVS said its internal data indicates that 35% of Black Americans do not plan to get vaccinated when they’re first able to do so.

When can most people get a COVID-19 vaccine? Do teachers need to be vaccinated before schools can reopen? When will life go back to normal?

Those are some of the basic questions that the White House has sometimes struggled to answer as President Joe Biden tackles the biggest issue of his presidency: ending the pandemic and getting the economy and daily life back on track.

Biden has pledged not only to address the challenges more intelligently and capably than his predecessor, but also to admit when things go wrong.

Still, both communication missteps and the difficulty of making predictions for an evolving situation have led to confusion on some goals and timelines.

Biden has also been accused of setting the bar too low in some areas to make it easier to claim victory. Some heath experts questioned whether his pledge of 100 million vaccine shots in his first 100 days was too slow after pace of vaccinations during January increased. Biden is set to blow past the goal, and Andy Slavitt, Biden’s senior adviser for COVID-19 response, called the 100 million goal “a floor, not a ceiling.”

A recent study found pregnant women in Washington state were infected with COVID-19 at a 70% higher rate than others at similar ages.

Additionally, rates of infection among pregnant women of color were far higher than researchers expected, according to the study published in the American Journal of Obstetrics and Gynecology. The study provides further evidence that pregnancy should be considered a high-risk health condition for COVID-19 vaccine priority, said senior author Dr. Kristina Adams Waldorf, an OB-GYN at the University of Washington School of Medicine.

“Our data indicates that pregnant people did not avoid the pandemic as we hoped that they would, and communities of color bore the greatest burden,” Waldorf said.

While there’s little safety data on the COVID-19 vaccine for pregnant women, Pfizer-BioNTech announced Thursday the start of its highly anticipated clinical trial to evaluate the vaccine in pregnant women.

Participants received their first doses in the U.S. The trial will enroll about 4,000 healthy pregnant women over 18 years old from countries in North America, South America, Europe and Africa.

Survivors of COVID-19 who produce lots of disease-fighting antibodies carry within them a weapon in the fight to prevent severe complications from the coronavirus. Their antibody-rich blood plasma helps block the virus, when transfused early into newly diagnosed patients – and may even be helpful against infections with new variants of the coronavirus.

If an outbreak caused by a variant of the coronavirus occurs in a community, its survivors could become the medicine chest for others who fall sick, a New Jersey researcher said.

“They essentially have the treatment for the variants in their body,” said Dr. Michele Donato, lead researcher at Hackensack University Medical Center for a group of studies about COVID-19 survivors’ blood plasma. “The plasma contains the antibodies of the virus that’s in the community at that time.”

Recovered patients would be able to donate plasma after they have been symptom-free for two weeks, and the plasma would be ready to deploy in three days, she said. “Collection of plasma is a very low-tech, easy process.”

The S&P 500 was at its peak one year ago today. This chart shows the remarkable recovery from the drawdown that ensued