What the Iran nuclear talks mean for oil prices

While the oil market has seen some volatility on news of multi-party talks in Vienna to re-include the US in the 2015 nuclear deal with Iran, don’t be on the lookout for rapid progress.

Here’s a look at what’s at stake:

In 2018, then-President Donald Trump pulled the US out of the 2015 Joint Comprehensive Plan of Action, also known as the Iranian nuclear deal, which limited the country’s nuclear enrichment efforts. Although the International Atomic Energy Agency said Iran had largely complied with the deal, Trump reimposed previous sanctions and added new ones in what the government called a campaign of maximum pressure.

Iran responded by violating the terms of the agreement and strengthening its nuclear capabilities. The supply of enriched uranium has grown significantly, according to the International Atomic Energy Agency, but is still well below the level prior to the 2015 deal.


Negotiators from other nations who have signed the JCPOA – Russia, China, France and the UK – started meetings in Vienna on Tuesday to get the deal going again. US negotiators were present but did not meet personally with Iranian officials. Instead, European negotiators have acted as mediators.

How far are the US and Iran from each other?

Both the US and Iran have insisted that the other side act first.

US officials sounded like they were weakening their stance a little ahead of the talks, Helima Croft, head of global commodities strategy at RBC Capital Markets, said in a Monday note, citing a television interview with Robert Malley, the US special envoy for Iran, from April 2nd.

“Noticeably absent were the emphatic statements that Iran must take the first step and reverse all JCPOA breeches and that there is no urgency to reach an agreement. This may leave the door open to save Washington and Tehran at the same time, ”Croft wrote.

A significant move in the talks would make the prospects for the return of large quantities of Iranian oil exports “quite high” in the second half of this year, she said. However, the position of Iranian Supreme Leader Ali Khamenei remains unclear and remains the greatest uncertainty regarding the talks.

“If Washington or Tehran (or both) step in and there is no breakthrough in the next few weeks, the chances of reviving the deal and fully restoring Iranian oil exports this year will be greatly reduced,” Croft wrote.

What is at stake for the oil market?

Oil futures fell sharply on Monday, partly attributing traders to expectations that the talks could move forward, although analysts said the move, which was also attributed to other factors, was likely exaggerated. oil took back some lost ground on Tuesday with June Brent crude
BRN00, + 1.17%,
The global benchmark rose 57 cents, or 0.9%, to $ 62.71 a barrel at ICE Futures Europe. May West Texas Intermediate Crude Oil
CL.1, + 1.31%

Iran seems to have already boosted oil exports somewhat, according to news reports, China saw an increase in purchases in March.

Goldman Sachs analysts recently raised their estimate of Iranian production to 2.7 million barrels a day based on what the company said it had identified as a sharp increase in exports this year. They expect production to stay near these levels through the second quarter of next year, followed by an increase of 900,000 barrels per day through the end of 2022. They also forecast 20 million over the next six months Barrel of oil will leak from the floating store Talks will continue (see table below). 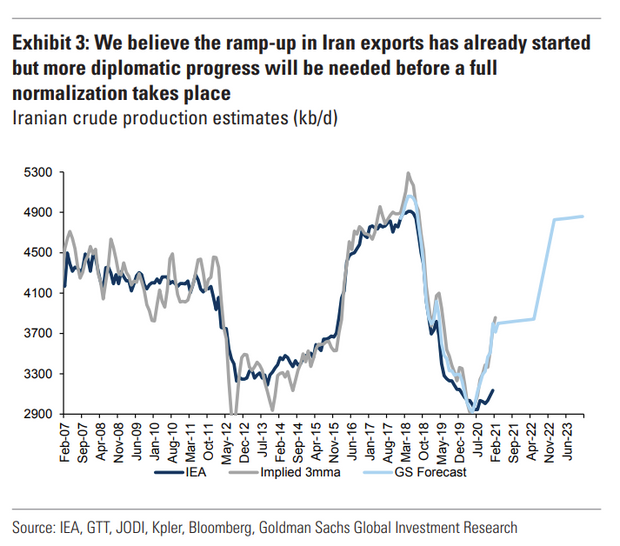 
Goldman analysts said the talks did not threaten their bullish view of the oil price, but could affect the “price path”. Given the Biden government’s desire to resume the deal, most analysts are looking for Iranian crude to get back on the market at some point. In the meantime, the Petroleum Exporting Countries Organization and its allies would likely try to adjust production to accommodate the increase.

But “timing” a deal could create “asymmetrical risk” for Goldman’s forecast for a year-end price of $ 75 a barrel for Brent in 2021 and 2022. A normalization before the end of the year would reduce the forecast by USD 5 per barrel. While the lack of a deal in 2022 could create more than $ 10 a barrel upside risk, they said.